The class kicked my butt.  Not enough that I couldn't drive home thankfully, but enough that I was pouring sweat and my legs were burning.  There was a lot of climbing and jumping (going from a sitting to climbing position... what I call a squat on a bike) with some sprinting at the beginning and the end.  The sprinting and climbing I had no issues with.  I was able to dig deep down and get through those.  It was all the ups and downs of jumping that were killing me!  My knees were definitely feeling all the ups and downs as well and about 20-25 minutes in they were starting to hurt.  So I simply sat out a few jumps, joined in on most, and they were fine.

Here's the greatest (yet weirdest part)... My legs and knees are totally and completely fine this morning. The only thing sore is my butt and that's from the stupid bike seat.  So overall, I'm feeling great considering how much I worked, how intense of a burn there was in the workout, and how tired I was after.  Plus, my knee that is always tight is looser this morning.  Is it from spinning?  I'd like to think so, but I won't base in massive conclusions on just one workout.

Now I'm not going to kill myself again tonight, at least not at another spinning class.  I'll probably spin 2-3 times a week and do yoga 1 day.  That leaves me 2-3 days for resting and running which should overall workout well.

My body was out of shape last week, but it's about to go through my version of training camp start now.  Hopefully it can still keep up... 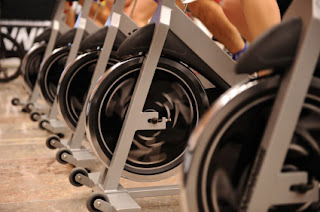 Posted by Unknown at 4:20 AM No comments:

Email ThisBlogThis!Share to TwitterShare to FacebookShare to Pinterest
Labels: Spinning

Guess who's slowly coming back?

It's finally turning into a "slow" season at work and I'm returning to a position where my work schedule is a little more routine.  That means I can run again, and also get into new types of workouts, which I am of course excited for.

Taking March off from running was nice, but I'll admit that I was definitely becoming jealous of other runners by the end of the month.  I wasn't exactly stir crazy, like usual, but I wanted to be out there running instead of just being tired from walking all day for work.  The good news is that I managed my diet enough that I didn't gain any weight so I won't be fighting that battle as much as I was expecting.

Still, March is over, April is almost over, and I am just now regaining my footing in running.  I have a few months to get back into shape and get ready for this Dumbo Challenge at Disneyland.  I've been able to get up to 2.2 miles again and I can tell I'm definitely out of shape.  Luckily that's never stopped me before, nor will it stop me now.

I'm not going to be returning just to running, but I'm going to go back to some of the cross training I did in college for swimming and triathlon.  I heading to spinning classes and maybe some yoga.

I finally found a gym that includes spinning, yoga, and other classes in the membership and, after checking out the gym in person, I've signed up.  I'm hoping to do my first spinning class tomorrow and I am super excited because I've really missed it.  I had a blast spinning in the off season for swimming.  Plus it will be easier on my knees, get my endurance back up, and should give me that distraction from just running.  Along with yoga for stretching and runs on the other days... this should be a pretty good workout schedule.  It will be a hard one, but if I can keep it up, it'll be a good one.
Posted by Unknown at 4:45 PM 1 comment: