Yesterday, runDisney finally premiered the medal for the 5th Princess Half Marathon.  During the Tower of Terror expo I was hanging around the medal area for a bit and heard quite a few people asking, quite excitedly, about the new medal, but the runDisney cast members were tight lipped, although equally excited about it. 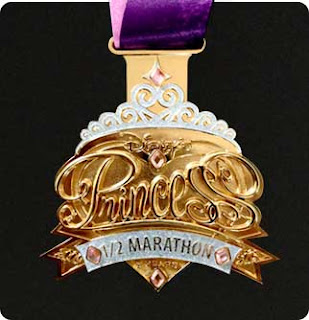 I do agree with some comments that I've read that it's not as spectacular as the 20th anniversary marathon medal or the Tower of Terror medal, but it's still keeping true to the race and all of the other medals, something I can respect.  Yes it has more glitz, which every princess needs, and it stands out form the previous 4 tiara medals.

I do wish the years would be a bit more visible (2009 and 2013 are inscribed on the gold banner behind the 1.2 Marathon... yes it's hard to see...), but this is also just the 5th year!  In all honesty, Disneyland Half's 5th year medal probably could have been better (although not for me personally since it was my first ever).  I expect each anniversary to get better and better... I mean, look at the 20th anniversary medal... it took it 20 years to get to that!

One Step Forward, Two Steps Back

When I was back in California in July, I had gotten some new shoes.  I wore them for a while, but while running felt great, afterwards I could barely walk.  My IT band was absolutely killing me.  Being the naive runner I am, I just figured that it was me breaking in the shoes... How wrong I was.

I talked to one of the physical therapists that were at the Tower of Terror run and they pretty much hit the nail on the head without me saying all that much.  They brought up a few points that I had never thought about.  When I got the new shoes, they had put me on a treadmill and video taped me running. However, I was barefoot and not running all that long or fast.  So pretty much, the video picked up the extreme issues with my running, not the everyday issues.

So I got fitted for a stability shoe when I needed a neutral, which I had in the first place.  So pretty much, every time I ran, I was overcorrecting for issues that weren't really issues.  Now, I'm suffering for that.

The same physical therapist told me to get Asics Cumulus, which guess what... was my original (and favorite) shoe!  I quickly bought another pair and have been getting better ever since.  The recovery process has been slow, but luckily this week I've finally been able to walk for most of the day (not all, but most) correctly and without too much pain.  Still, my IT band isn't totally better and my endurance has been shot.

So yes, I'm worried right now.  I've been able to get the right shoes so I can jump back into training, but unfortunately I'm not back up to where I need to be.  My endurance is shot, but hopefully that will start building back up quickly.  The good news is my speed is still there.  In fact, I ran 7 miles today and the last mile can in under 10 min pace!  Not all of the miles were like that, but it was a nice note to finish on.

The marathon is in just under 3 months and I don't know if physically I'm truly ready for it.  Mentally, I'm ready to take it on.  Let's just hope that my mental determination is enough to get me through the race if I'm not able to get my training back on track.
Posted by Unknown at 7:20 AM No comments:

When I started running way back when, it was to build endurance for my swimming.  Now, it's been all about staying healthy and maintaining my fitness.

Swimmer's have the big shoulders and arms, which I definitely had while I was swimming and even after.  Luckily now, I'm starting to thin out and my shoulders are starting to shrink a little bit.  As my dad says, I'm finally starting to lose my baby fat.  Bout time considering I'm in my early 20s.

Since January, I've lost about 15 pounds and have been able to hold it.  I've gotten to that point where the numbers are staying the same (even though I'm eating what I want which is nice) and now its my body that's changing.  In the following pictures you can probably see that difference...

As it is Food and Wine season, I've been lucky enough to stay in the Epcot Resort area, The Boardwalk to be exact, for the last few days.  One of the reasons I was so excited to stay here is because I love running around this area.  Every Christmas I've run here and there's just a lot of memories connected to it.

I ran yesterday morning, as well as this morning, discovering where different sidewalks around the resorts go so I can expand my runs.  Right now I haven't done more than 3.6 mile around the area during this trip, but I think I've found some decently long loops.

This morning Hollywood Studios looked... magical.  Excuse the grainy picture, but I did take it on my phone... 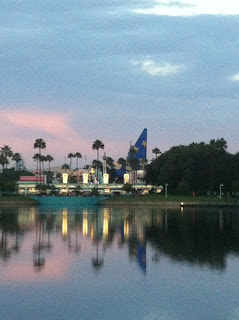 Yesterday I watched Spaceship Earth disappear in fog, but I didn't get a picture of it.  Who knows what I might see tomorrow...

The sad part is tomorrow is our last day here, but considering I live close by, my friends and I might make a few early morning trips to some of the resorts for some runs, especially as the weather gets cooler.

Posted by Unknown at 7:50 AM No comments:

Running Under The Moon- Tower of Terror 10 Mile 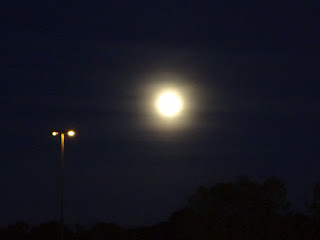 That is not a spotlight... that's the full moon that hung over the Tower of Terror 10 Mile race.  Can you say perfect timing?

I've never really hung out at the pre race areas before, but this time I did since I had different groups of friends to meet up with.  They had a few backdrops you could get pictures with and since I had plenty of time I took full advantage of them.  Here are just a few pics (and yes you could sign one of them). 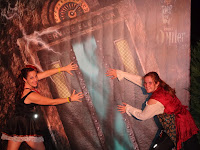 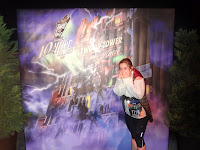 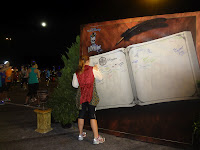 The race itself started with the traditional fireworks at the entrance to Hollywood Studio's parking.  We had to be careful with a concrete divider in the center of the road and personally I would have moved the start past the divider, but then again, I'm sure runDisney had the logistical reasons to have it where it was.  As far as I can tell, no one got hurt there (or at least hopefully).

The mile markers all had villains on them (well one had Stitch and I don't count Stitch as a villain).  There were a few character stops along the way (pictures below), but they were far and few between.  There was just a lot of long stretches where there really wasn't much going on.  In fact, the first two miles were pretty dull until you got to Animal Kingdom. 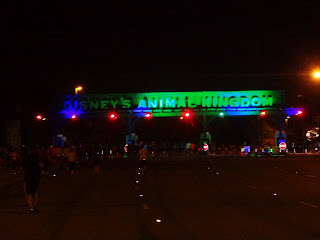 One of the coolest parts was when we left Osceola Parkway and turned into ESPN Wide World of Sports.  There was a small trail we had to run on which really only fit maybe 4-5 runners wide.  So yes, it was a bit of a pain to run on, but it was themed perfectly.  There was spanish moss drooping from all of the trees, pirate decorations, and oversized bugs hung from the trees.  It was really cool to run through, one of the most memorable really.

We ran on the track (where the gravediggers were) and then around the Brave's training diamond.  Just like at the Disneyland Half, they projected our images onto the big screen.  However, this time they had a background where it looked like the runners were running out of a service elevator.

The run through Hollywood Studios went well.  You got to see most of the park, but of course that park isn't too big.  The finish line was backstage where you could see the Tower of Terror, but there weren't too many people around the finish.  Most were in the actual park.  There was a lot of walking to get back to the meeting area.  There was one volunteer who was yelling at runners to move back if they were waiting for friends/family to finish and if they weren't they had to keep running.  She wasn't very nice and definitely needed a bit of an attitude adjustment.

I wish I could tell you about the post run party, but I left pretty much straight away because I had to work only a few short hours later.  I will be attending the after party for the Wine and Dine Half Marathon so I'll be able to tell you all about that one...

Now, for some character photos: 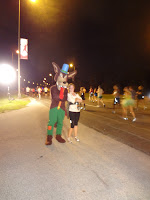 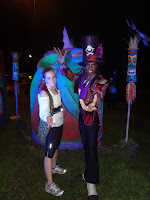 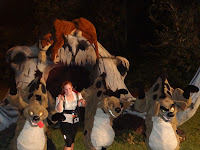 My ending time without character stops: 1:42
Posted by Unknown at 7:05 PM No comments: