The Hardest Part of the Holidays...

I spent my holidays split with my parents at Disney World and at work.  I was able to run a little bit around the Epcot resorts, which is something I always look forward to doing on my parent's visits.  The running was a bit tough because I was still a tad bit sore from the 13 miler last week and my stomach was more than full from all of the wonderful food we were eating.  I swear, I could almost start another blog all about the great food we were eating.

This morning was my return to "real" life and while it's my day off from work, I knew I had to get some kind of run in.  It took my almost an hour to convince myself to get out of bed and out onto the road, but I eventually did... well, after a quick change of clothes because it was a lot colder than expecting.

Todays run felt pretty good and it always seems that my best runs are the runs that I really don't want to do.  I didn't want to run at all before the 13 miler last week and it was a great run... I didn't want to run today, but I felt really good.  Still, I'm trying to relax a bit and then get a few medium runs in before the marathon.  I do have just about 2.5 weeks left!

So now I have a few holiday pounds to loose again, but it should be easier now that I'm cooking for myself again.  I might be dreaming about some of the dishes we had though for a while...
Posted by Unknown at 8:09 AM 1 comment:

So I might not have gotten to the 18-20 mile mark, but I did run more than 11.  I was able to get in 13.18 miles... just over the half marathon mark.  The best part, it felt better for longer.  Almost to mile 9 I was feeling pretty good with only a few small annoyances.  That's what I've decided most of my aches and pains are... annoyances. 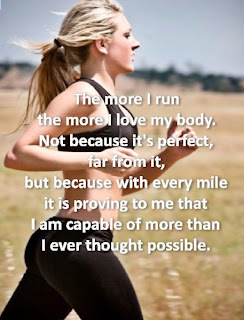 The picture above came to mind during my run.  I was so impressed with how good I felt and how strong I was feeling.  I was so proud of myself, partially because the night before I was so tired and sick of running I wasn't even sure if I was going to get out there and do any of these longer runs.  The night before my run I was at one of my lowest lows about my feelings toward running... kind of like a runner's depression, but I got outside and I was able to run 13 miles!  So, so proud of myself.

I've realized my biggest issue is the lack of true strength training.  It's going to be on my focuses, I think, for next year and my next (shall I really say it?) marathon.  If anyone has any favorite circuits or routines for strength training for runners, I would love to hear them!

In other news, another reason I had to run yesterday... Christmas party!  I hosted my work's cookie exchange and white elephant.  The hard part was that I was on my feet for a majority of the day AFTER my run, but I did get to eat all these yummy cookies.  My red velvet cookies were a big hit and considering how addicting they are, I'm stopping by work today just to get them out of my house! 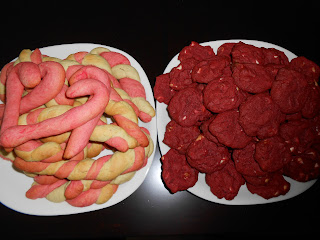 Posted by Unknown at 6:08 AM No comments:

I've decided that I will probably never be ready for this marathon.  I had my so called long run today and ended up running 11 miles.  I could have run more, but I don't want to risk anymore injuries or knee issues.  I actually felt pretty decent on the run.  Tired and sore, definitely, but no major aches or pains.

My knee did start to hurt around mile 10, but then calmed down a short time later.  It's kind of like I hit my wall and my knee hits its own wall and it's all about over coming both of them.  I did push through some of the tiredness, but I couldn't beat it all... 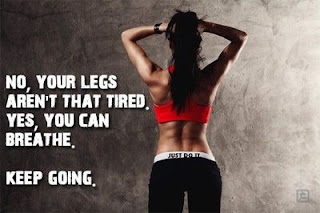 I kept repeating this mantra in my head towards the end of my run and I'm sure it's going to become my anthem during the marathon.  It's going to be part of my mental plan to keep me going.  That whole 80% mental 20% physical saying... it's completely and utterly true.

The closer this marathon gets, the more and more nervous I get.  I do have a few friends running the race as well and one is having even worse knee problems and than me.  I figure that at the least, we'll pull each other across the finish line if it comes to it.

I was thinking for a little bit today while I was icing my knees and I realized... this is pretty similar to how I felt right before my first half marathon.  I was just as nervous, just as worried... Now about 2.5 years later, I love half's and while they will always be a challenge, I'm totally and utterly addicted.  Maybe that will happen with this marathon?  One can always think positive...
Posted by Unknown at 7:43 AM No comments:

I am proud to say that while I'm extremely frustrated with my training right now, I do have good news to report.  I have multiple long term goals that I'll probably have most of my life, but I also had a few goals that I wanted to meet during 2012.  Well, I'm proud to announce that not only did I hit both my goals and then some!


As of today, I've run 522.68 miles!  By the end of the year I plan to be closer to 600 miles, but probably won't surpass it.  During the middle of the year I fell off track, but I chipped away at it every week and so now I'm way ahead of schedule.  Of course, that means I have to up my goal for next year.  So right now I just want to run more than 600 miles in 2013, but I might increase that to 650 or something else.  I'll reassess that towards the end of the year.

I've definitely run more races this year than I have in the past.  While I'll never compete as much as I did in high school when I spent every weekend one summer at swim meets, open water events, and triathlons, I have never run as many running events as I did this year.

As for my long term goals... my nutrition has been improving all year although there are definitely days where I'm craving some greasy wonderfulness, but those days are getting farther and farther apart.  I'm cooking a lot more too which is nice.  I've definitely lost weight this year and I've been able to keep most of it off, although it has definitely been a battle.  Again, that's just going to be a life long battle which I'll never be able to let my guard down with.


If you want to see more goals I've already set for 2014 and beyond you can check out the goal page...

In other news, I ran 3 days straight this weekend.  Only ran just over 11 miles, but I'm pretty happy with them overall.  I might even get 2 or 3 miles in tomorrow morning... who knows...

Posted by Unknown at 2:56 PM No comments: